Skip to content
According to Zhang Qing, the director of the Key Sports Value Research Institute and the founder of the key sports consultancy company, Adidas's sponsorship of the London Olympic Games may be missed again. Not only does it have no advantage when competing against competitors, but more importantly, The European market has little enthusiasm for the Olympic Games and the economic downturn. 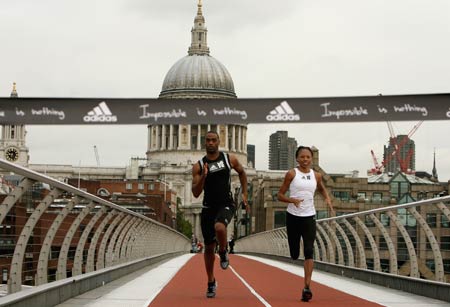 At the cost of a cumulative investment of 100 million pounds, transnational sports giant Adidas became one of the largest sponsors of the London 2012 Olympic Games. However, this largest Olympic sponsor has recently been exposed as a "sweatshop" in its factory in Cambodia. Workers earn only $15 a week.

Adidas later denied the "sweatshop". For the specific amount and prospective returns of adidas Olympic sponsorship submitted by the â€œInvestor Newsâ€ reporter, the relevant person in charge of the Adidas Public Relations Department only used the â€œOlympic Games to promote the Adidas brand, demonstrating that Adidas is committed to helping athletes play the best competitive level. "There is no positive response from the global best chance of brand spirit."

According to reports, this sports brand, which has been sponsored by the Olympics for several decades, suffered from the high morale of the 2008 Beijing Olympic Games and suffered from a backlog of inventory. In this year's European home market for the sponsorship of the London Olympics, what effect will Adidas receive?

The tragic memory of the Beijing Olympics

However, the facts later proved that Adidas did not win the championship in the Chinese market as previously expected. Not only was Li Ning surpassed that year, but the growth momentum of the domestic brands Anta, Peak and Xtep has still had a clear advantage.

The high expectations for the 2008 Beijing Olympics made Adidas overestimate the Chinese market that year. Some dealers said that they got goods at a growth rate of 20% to 25% that year. After that year, Adidas began a long repair period. In August 2009, Adidas released the financial report for the second quarter of the year, showing that the value of inventory in the first half of the year increased by 13% to 2.041 billion euros.

â€œIn 2008 Beijing Olympics, due to the sudden financial crisis and the marketing encumbrance of Chinese local sporting goods companies, Adidas faced great challenges in the slowing down of the growth rate of the Chinese sports goods market, and the inventory pressure was huge. But deep The reason for the hierarchy lies in Adidas' supply chain management and cost pressures,â€ said Wang Yiming, head of Haitian Sports and Sports Marketing, who analyzed the â€œInvestorâ€ reporter.

Statistics show that the proportion of past Olympic sponsored companies that reached the goal of sponsorship and did not achieve the desired goal is 1:9. From this point of view, obtaining sponsorship qualifications is not necessarily a good thing, and not obtaining sponsorship qualifications is not necessarily a bad thing. Using this conclusion to describe the Olympic official sponsor Adidas and the unofficial sponsor Nike, it can be said that it is appropriate.

â€œSince the establishment of Nike Inc. in the United States in 1972 and gradually seized the throne of Adiâ€™s worldâ€™s largest sporting goods supplier, Nike has always been a pain in Adiâ€™s mind. This time it must also want to leverage on the London Olympics and not to recapture Europe. The market first, at least, is intended to be the first in the UK market.â€ Li Dongming, general manager of Beijing Centraxis Sports Management Co., Ltd., told the â€œInvestorâ€ reporter.

In fact, except for the sponsorship of the Olympics, football has always been a traditional project sponsored by Adidas. In Li Dongming's view, "At this year's Euro Cup sponsorship, Adi can be said to have lost." He said that Adidas's official sponsorship, but in this competition in the European Cup to give 60% of the opponent to Nike.

Back in this year's London Olympics, the situation was so similar. Adidas still takes the official channel. According to the person in charge of the "Investor" reporters, they provide equipment for all British team athletes. They are also official partners of 10 other national Olympic committees, including Australia, France and Germany, in total, provided products for 25 of the 26 sports majors of the Olympic Games. Nike is still "stitchy" to the International Olympic Committee and the London Olympic Organizing Committee, and will focus on Olympic stars and advertising.

Which kind of effect is better? In fact, we can see from the success of the successive Olympic Games: This year's British media survey shows that in the British public awareness, the brand most closely associated with the Olympic Games is actually Nike.

According to Zhang Qing, the director of the Key Sports Value Research Institute and the founder of the key sports consultancy company, Adidas's sponsorship of the London Olympic Games may be missed again. Not only does it have no advantage when competing against competitors, but more importantly, The European market has little enthusiasm for the Olympic Games and the economic downturn.

"This year's Olympics situation is not the same as the Beijing Olympics and cannot be compared. However, Adidas still has risks in this Olympic Games. Adidas has always been the single-digit growth in the European market, and European people's enthusiasm for the Olympics has not been the same as before. The Chinese people holding the Beijing Olympic Games are so high that it is difficult for marketing in such events to stir up their purchasing wave for a time; and now, when the European economy is in the doldrums, the benefits Olympic marketing can bring to Addi may be lower than before. Zhang Qing told reporters from the Investor News.

Wang Yiming believes that adidas has been afflicted by negative news about the advent of Adidas and the Olympic Games Organizing Committee. In the long run, the close games of the two giants will continue. With the addition of other sports brands in Europe, the marketing competition is fierce.